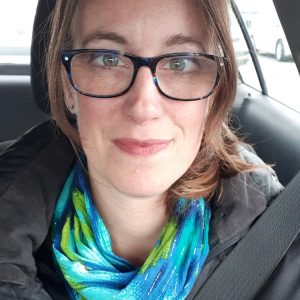 Sherry Osborne is a Canadian author who is in the process of working on her debut novel. When she’s not writing she can be found desperately trying to get through her always-growing to-read pile of books, binge watching something on Netflix, discussing zombie survival as though it were an actual threat (isn’t it though?), and having dance parties when she should be doing housework.

Her first novel, A House of Graves and Secrets, follows the story of a teenage girl who is worried about starting a new school late in the year when she should really be much more concerned with what else is occupying the space in her attic bedroom in the house by the graveyard. Growing up with a father who has worked in fields of death for as long as she can remember has made her unafraid of dark subjects – but that just might be her downfall.

She has a day job that keeps her busy and happy, but it’s not unusual to see her suddenly freeze and then frantically scribble something down as random story ideas suddenly take hold, often at the most inopportune time (her favorite thing to say to her Google Home Mini is, “hey Google, take a note! The main character walks into the house and…”).

Sherry was born in Toronto, grew up in Montreal, and moved to Halifax in 2011 with her husband and two children. She loves where she lives but spends an incredible amount of time complaining about being cold and waiting for the brief season known as summer.

She feels like an incredible dork when writing in the third person but tries hard to make her way through it anway.